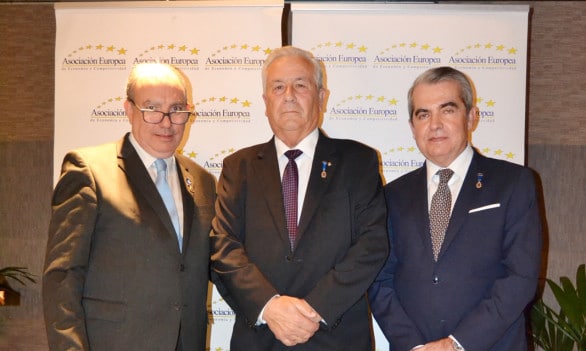 The first European Medal for Merit at Work awards by the European Association of Economy and Competitiveness (AEDEEC) took place on January 25th, 2018. This Gold Medal recognizes the entrepreneurial spirit within the European framework to several companies, institutions and professional experts who have promoted entrepreneurial awareness and good practice in private entities.

The European Association of Economy and Competitiveness awarded the European Medal for Merit at Work 2018 to Juan Mula Alcaraz, Manager of Agrícola Santa Eulalia.

In Agrícola Santa Eulalia we have a reason to celebrate, since our manager, Juan Mula Alcaraz, was one of the persons recognized in this area. He received the award from the president of the Association, José Luis Barceló, the editor and director of El Mundo Financiero, together with the vice president, the lawyer Juan Ignacio Navas Marqués, founding partner of Navas & Cusí Abogados.

During the ceremony, which was presented by the renowned journalist Ana García Lozano, Dr. Jorge Planas Ribó was appointed an Honorary Member of the European Association of Economy and Competitiveness. He was granted an award in recognition of his career as a professor at the Universities of Barcelona and Rome, as well as to his work at the Planas Clinic, which was founded by his father and where he works as a plastic surgeon and medical director.

Agrícola Santa Eulalia is a family-run company of several generations which, since its establishment, has devoted itself to the production of fruit and vegetable food, particularly broccoli, which is presented under the brand Mr. Broko. Thanks to years of experience and to an optimal planting strategy, which would not be possible without the efforts of each and every member of our team, Agrícola Santa Eulalia offers all its clients a global quality service throughout the year.